So September is here and we have another jam packed issue. Hopefully this i 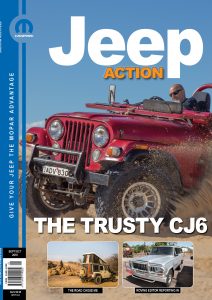 ssue should keep some readers busy, while they are waiting for the JL Wangler launch in Australia.

In this issue of Jeep Action, we have a CJ6 owner profile and plenty of travel articles. From MOAB to Africa and even one here in Australia and as always we have plenty of awesome Jeeps and Jeepers covered.

We have a first aid feature from the Royal Flying Doctors Service on snake bites. The RFDS covers 7.13 million square kilometers, providing 24-hour aero-medical emergency services to country Australia. The RFDS is in it’s 90th year of service and helps to save many lives and relies on donations from the public to keep it’s service operational.

Michael has been busy doing plenty of hours behind the wheel of his Grand Cherokee and checks in with a couple of subscribers. Michael also talks about some of the builds featured from the past fifteen years in this issue.

So please keep sending in those profiles, Your Says and Jeep stories, so we can share them with other Jeep enthusiasts.
Enjoy your September/ October issue.