The November / December issue is overflowing with great articles and info. 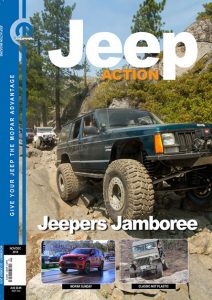 Topher and Bridget from Expedition Earth came close to missing the deadline due to travelling through some very remote areas. We also have the latest installment from Dan as he continues through Africa and there are many other stories and updates.

This year I’m heading back to SEMA to cover the show and will be officially serving as a judge for the 2018 SEMA Global Media Awards Program which is a great honor, meanwhile Michael is heading off with the guys from ROCO 4×4 and joining them for RAW 2018 in Honduras.

We are into the final straight for this year which has been massive for the Jeep brand with the release of the long-awaited JL Wrangler and the new Cherokee. There are other announcements from Jeep covered in Jeep News.

I had the pleasure of meeting and working alongside Chris Collard at the BFG KM3 tyre launch earlier this year. Chris has traveled across all seven continents by four-wheel drive, is the international correspondent for magazines in Europe, Africa, and Asia, and the previous Editor-In-Chief of Overland Journal.

He has raced in or reported on events ranging from the Dakar Rally and Outback Challenge Morocco to the Australasian Safari and Mexican 1000, and was recently inducted into the Off Road Motorsports Hall of Fame as a pioneering journalist. One of his favorite pastimes is tipping a coldy around the campfire after a day of wheeling California’s Sierra Nevada in his 1952 Willys 3A. For this issue he reports from the Rubicon Trail on the granddaddy of Jeep events, the Jeepers Jamboree.

Please keep those owner profiles, Jeep Stories and “Your Says” rolling in, so we can share them with other Jeep enthusiasts