Well, I’m coming up to a year in the hot seat, and to be honest it has been a massive learning curve with lots of moving parts but I still haven’t acquired a Chief yet, haha. 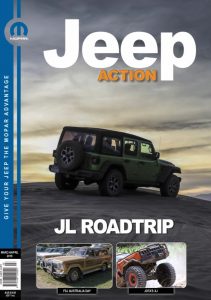 The guys from Expedition Earth have shipped Gunther their JK Wrangler onto the next leg of their trip, so will be back next issue with an update.

But in saying that we have plenty of other great stories Including Jeep News. The first look at the Australian Spec of the long-awaited JL Wrangler. We also check in on the first “Australia Day” FSJ weekend and a recap on the Military 6×6 and some owner’s profiles, so that means we have plenty of awesome Jeeping goodness for all.

Michael is still at large. But has checked in with an update on what he has been up to and he has an owner’s profile on Jota’s XJ. Jota has been on the past two RAW events with Michael. RAW 2017 and 2018 were held by Raco 4×4 and Michael has been fortunate enough to have been a guest on both.

Cristian Brunelli travels from Melbourne to LA to give us his take on a JL Wrangler, when he takes it on a Road Trips from LA to Las Vegas stopping off at plenty of iconic landmarks.
So please stay in touch and keep sending in those Your Says, profiles and Jeep stories, so we can share them with all the other Jeep enthusiasts out there.