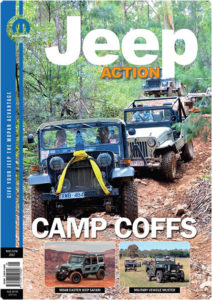 Well, we have just held our 14th Camp Coffs over the Easter weekend and what a great time it was. Some Jeepers have attended for at least 10 years in a row, it has become their yearly go-to Jeep event, and many others have clocked up at least five years attending Camp Coffs. The event has always been held in the Coffs Harbour area in various locations.

The current venue at Nana Glen has been our location since 2013 and was also used in 2008. Camp Coffs has always been held over the Easter break with the exception of 2013 when we moved the Camp to the October long weekend. The reason for this was to allow Jeep Action to attend the Easter Jeep Safari (EJS ) in Moab which is also held over the Easter break. The EJS is a great event and something we would like to attend again in the future. We have a full report on Camp Coffs 2017 in this issue. 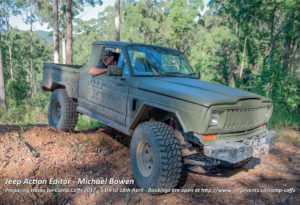 Jeep Action Magazine’s next event for the Jeeping community is “Jeepfest” at Lardner Park in Victoria on November 25th. This one day event will include vehicle displays, test track, show and shine, camping and caravanning displays, outdoor lifestyle vendors and
much more. There will also be a swap meet area, where, for a small fee you can swap and sell your Jeep bits and pieces. Ben is working hard bringing it all together, and there will
be more information in the July/August issue.